The target application demonstrators produced in REDFINCH will be achieved through the development of a number of key technologies, each of which will be a significant advance in the state-of-the-art: 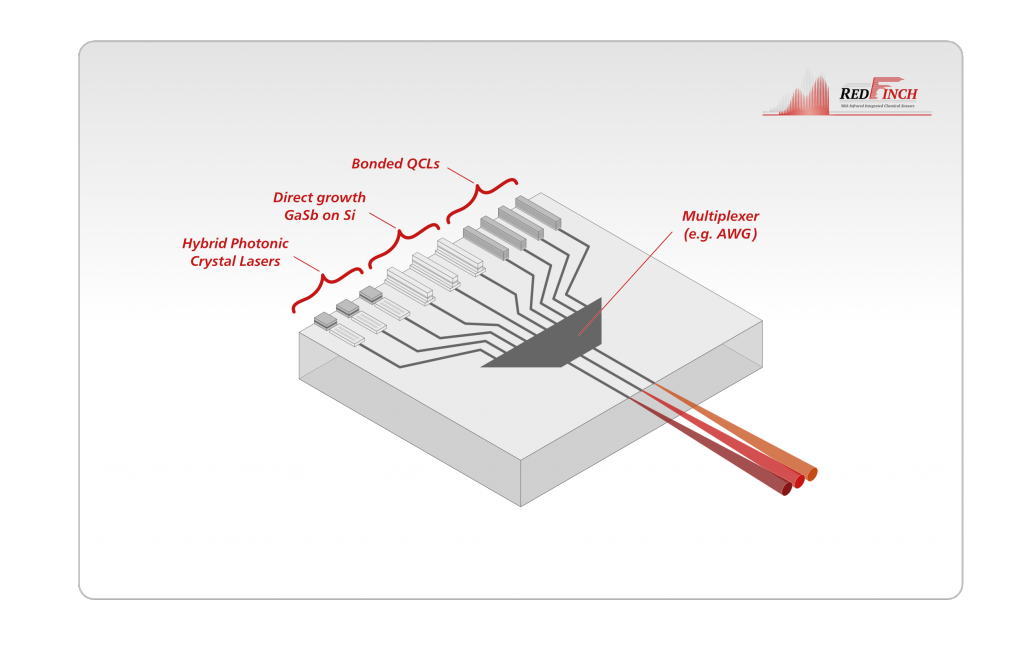 For flexible gas sensors, it is highly desirable to have a light source which can cover a wide range of wavelengths, in order to be able to target many different types of gases and absorption lines. While some limited tuning of a single laser diode is possible via e.g. electrical or thermal tuning, this is constrained by the gain bandwidth of the active region, and ultimately the material system used for the laser. It is rarely sufficient for effective multi-gas detection applications, particularly in the MIR range.

An obvious solution is to have an array of different laser diodes, each covering a slightly different wavelength range, with their individual outputs combined into a single output (or a small number of outputs) using an on-chip multiplexer such as an Arrayed Waveguide Grating (AWG). Progress towards this has already been made, with single-mode Quantum Cascade Lasers (QCLs) combined with a silicon multiplexer chip using a manually-aligned butt joint configuration. In REDFINCH, the assembly process will be developed to be more conducive to large-scale commercial manufacture, and the number and type of lasers used in the array will be expanded. The ultimate ambition is to realise a MIR multi-wavelength array incorporating a combination of QCLs, GaSb-based lasers grown directly on Si, and hybrid Photonic Crystal lasers, thereby spanning the whole range from 3-8 μm.

Laser photo-acoustic spectroscopy (PAS) is an efficient technique for non-contact analysis of trace amounts of chemical compounds in gas media, with sensitivities down to the parts per billion range possible. It works based on the fact that when light of a specific wavelength is absorbed by a gas, it causes the molecules to heat up. This heating, in turn, causes an increase in the local pressure. By modulating the intensity of the light, the pressure change is also modulated, creating a periodic pressure wave – i.e. a sound wave. This sound wave can be detected by a conventional microphone and amplified by tuning the modulation frequency to an acoustic resonance of the sample cell.

The advantage of PAS is that the acoustic detection arrangement depends only on the amplitude modulation of the illumination laser, and not on its wavelength. Since the detection does not rely on e.g. optical detectors or optical path lengths, different gases can be targeted simply by changing the illumination wavelength, without the need to make any physical adjustments to the detector setup. (Of course, different gases will have different absorption coefficients, which will affect signal strength, but in an easily predictable way). This makes PAS an ideal technique for multi-gas sensors. It also has the advantage that the performance scales favourably with miniaturisation.

A number of different ways of implementing PAS exist – in REDFINCH, a design based on a differential cell is used. In this approach, the gas enters two acoustic resonance chambers which have the same resonance response and are both equipped with microphones. However, the laser light excites the gas in only one of the resonators, so that taking the difference in the two microphone signals eliminates noise components that are coherent in both resonators. Within the REDFINCH project, this PAS sensor will be scaled down to a µm-sized cell fabricated in Si and fully integrated on-chip. 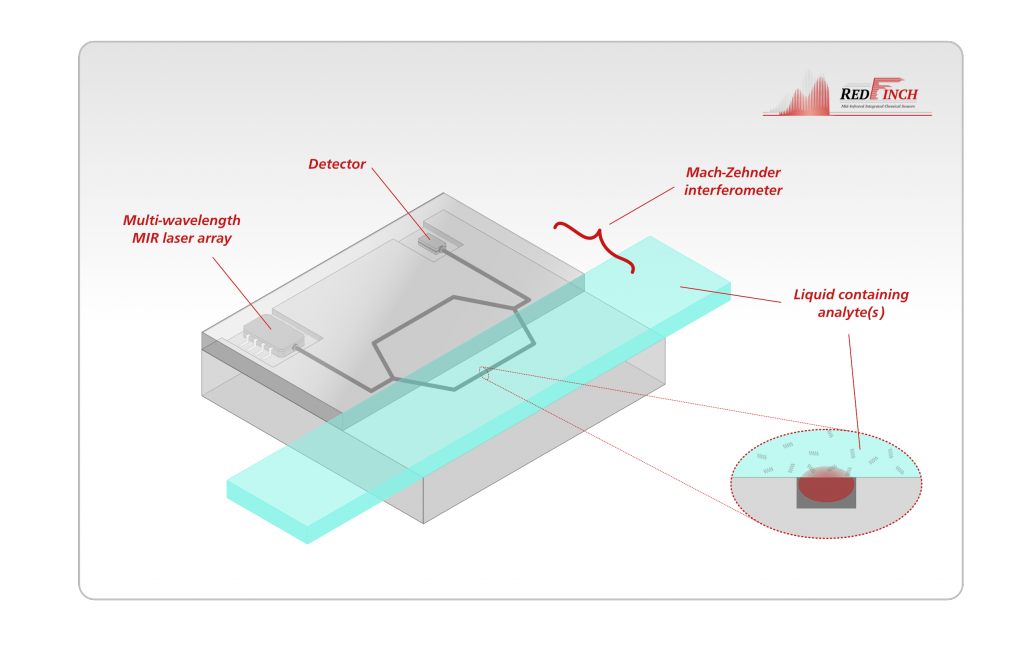 In a mobile or in-line process environment, monitoring via MIR spectroscopy is attractive due to its non-invasive nature, but highly accurate analysis of analytes in liquids by MIR is extremely challenging. This is largely due to the fact that water and other common solvents give rise to strong temperature-dependent background absorption, and the characteristic absorption features of dissolved analytes tend to be broad and often overlap. Hence, ideally a broadly tunable MIR laser source is required, in order to obtain many specific measurements over a wide spectral range. Unfortunately, the current state-of-the-art in such sources tend to be relatively large and expensive, and unsuited to portable or in-line applications. A possible workaround for this, where light from a benchtop source is carried by fibre optics to in-line sensor elements (e.g. ATR crystals), is hampered by the poor performance of currently-available fibre optic cables in the MIR spectral region. Consequently, such schemes are restricted to quite short cable runs, are sensitive to vibrations and often not rugged enough for practical use in process environments.

The REDFINCH partners propose to realise a compact, on-chip liquid sensor by combining the multi-wavelength MIR laser array (see above) with an evanescent wave Mach-Zehnder interferometer (MZI) fabricated with Ge waveguides on Si. In this arrangement, one arm of the MZI is in contact with the sample while the other arm remains covered (or alternatively, is exposed to a reference sample of the solvent). By making the dimensions of the waveguide a fraction of the employed MIR wavelength, the electric field of the light travelling in the waveguide extends into, and interacts with, the sample medium. This has an advantage over more typical ATR arrangements, since the light is in continuous contact with the sample throughout the waveguide, rather than only at a few reflection points as in an ATR crystal, thus increasing signal strength and sensitivity. The fully-integrated sensor will be compact and robust, as well as cheap enough to be widely deployed.

To receive the REDFINCH Newsletter and other project updates, click here: 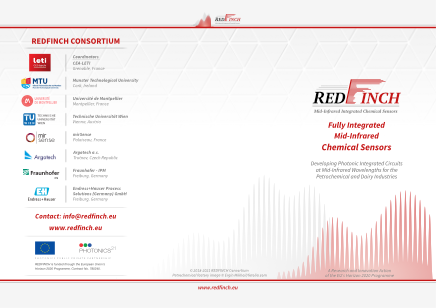